The Disobedience of Design 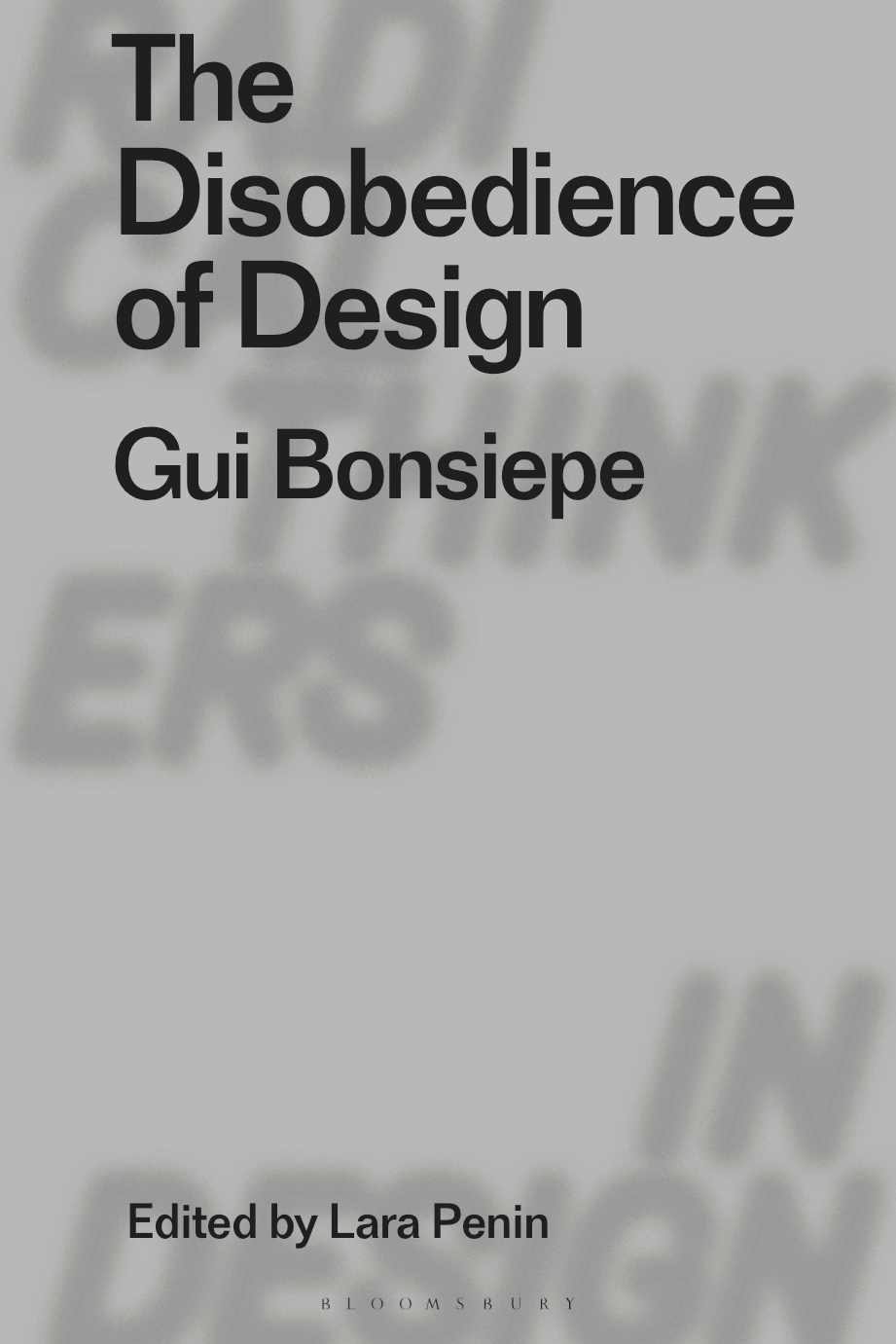 Wielding a powerful dissenting design imagination, Gui Bonsiepe is one of the most complex and accomplished design thinkers of our time. As this judiciously organized collection of his writings and projects demonstrates, beginning with his work in Ulm in the 1960s and then in Latin America after 1970 and continuing through his pioneering development of ontological interface design in the 1990s through to his more recent critiques of “design thinking”, The Disobedience of Design offers perspectives that challenge, radically, the limitations of contemporary European and American design practice and theory.

This book is long overdue in a contemporary English edition. Gui Bonsiepe, a mainstay in European and Latin and South American design culture, is little known in English-language design literature. The present cultural moment, with its emphatic interest in diversity and inclusion, brings a new relevance to Bonsiepe’s focus on “design in the periphery”.

Presenting, for the first time in English, an extensive selection of Bonsiepe’s papers The Disobedience of Design offers a helpful entry point into this timely discourse. Chronologically, it charts a cultural bridge between generations, spanning from design discourse of the Ulm School to the issues of early twenty-first century. Even more crucially, it provides valuable insights on the contested relationships between design praxis, design theory, and design research.

Gui Bonsiepe is an Argentina/Brazil based information designer, educator and author. Born in Germany in 1934, a student and then a teacher at hfg ulm (Hochschule für Gestaltung) until its closure in 1968, he participated under the direction of Tomás Maldonado amongst others in the development of a complex sign system for the interface of the Olivetti computer ELEA 9003. Since 1969 he has worked mainly in Latin America, providing consultancy and design services for public and private institutions. Before the military coup in 1973 he worked in Chile for the Allende government, most notably on the “Opsroom” for the Cybersyn project. He was vice-president of ICSID 1973-1975. Between 1987 and 1989 worked in interface and software design with Fernando Flores in California. From 1993 to 2003 he was professor for interface design at the University of Applied Sciences, Cologne, and he taught also at the Jan van Eyck Academie in Maastricht (1997-1999) and at ESDI (Escola Superior de Desenho Industrial) in Rio de Janeiro, 2003-2005. He lives and works in Brazil and Argentina. Special interests: design in peripheral countries, critical design discourse, visual rhetoric. He is the author of several books published in Germany, Italy, Switzerland, Netherlands, Argentina, Brazil, México, Spain, Korea including a trilogy of books spanning both theory and projects Cultura e sociedade (2011), Design como prática do projeto (2012), Do material ao digital (2015).

Lara de Sousa Penin is an Associate Professor of Transdisciplinary Design at Parsons School of Design, New York. Author of An Introduction to Service Design: Designing the Invisible (2018), her work is at the intersection of service and strategic design, participatory design and social justice. She is a graduate in Architecture and Urbanism from the University of São Paulo and has a PhD in Design from Milan Polytechnic University.